I got these 5 pieces of carvings which were ripped off from ancient panels of China's doors or cupboards, I am not sure. I kept them in my storage for years before deciding to mount them together on a huge crimson red board to act as its canvas. 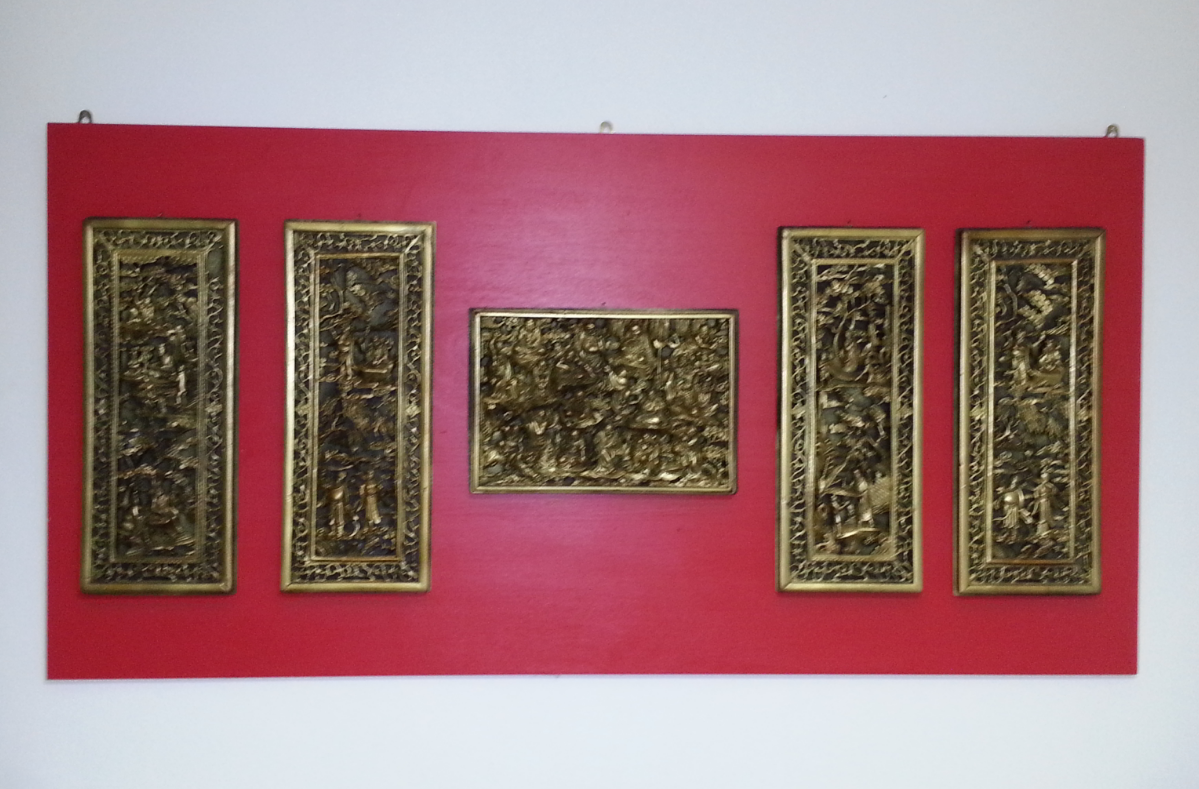 The red and gold pieces combination make a striking picture on my bare walls. I thought they were wooden carvings that were part of the Chinese Bridal Beds but the carvings showed a different picture. 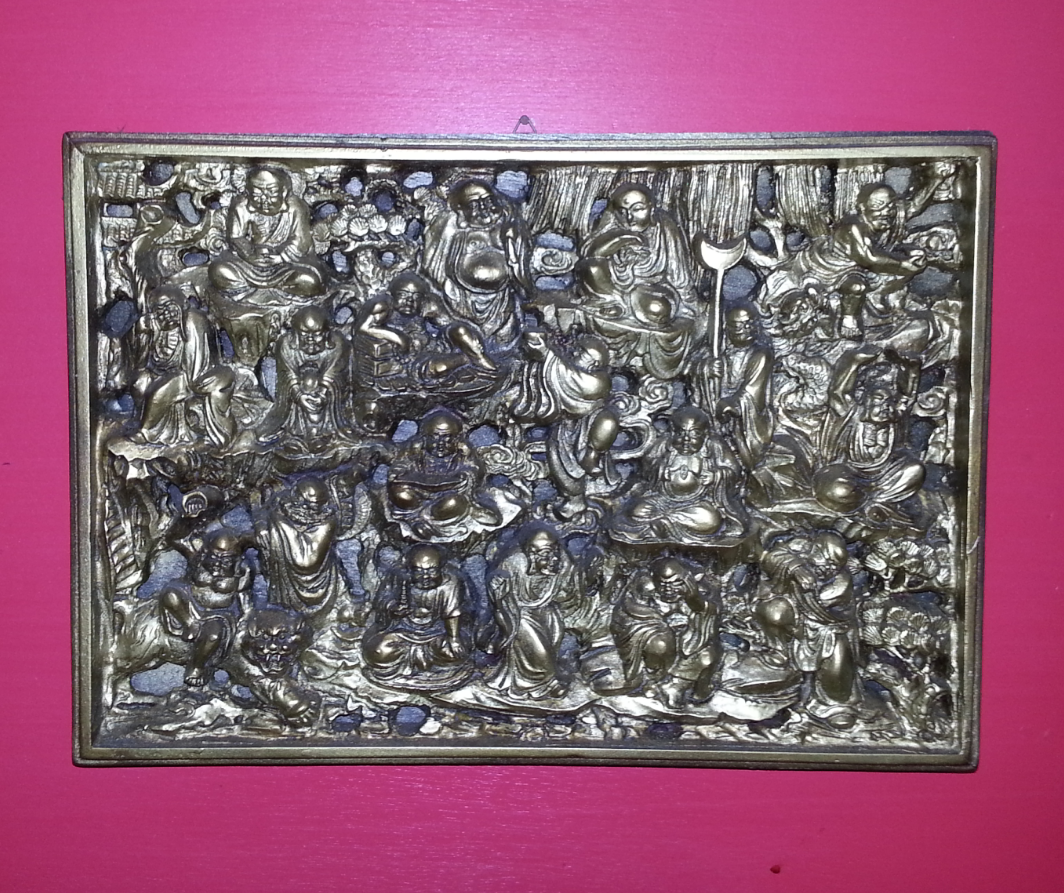 On closer look, the picture seems to tell a popular story of the Chinese folklore tales of the 8 Immortals or perhaps some activities of the 18 Lohans. (See Below) 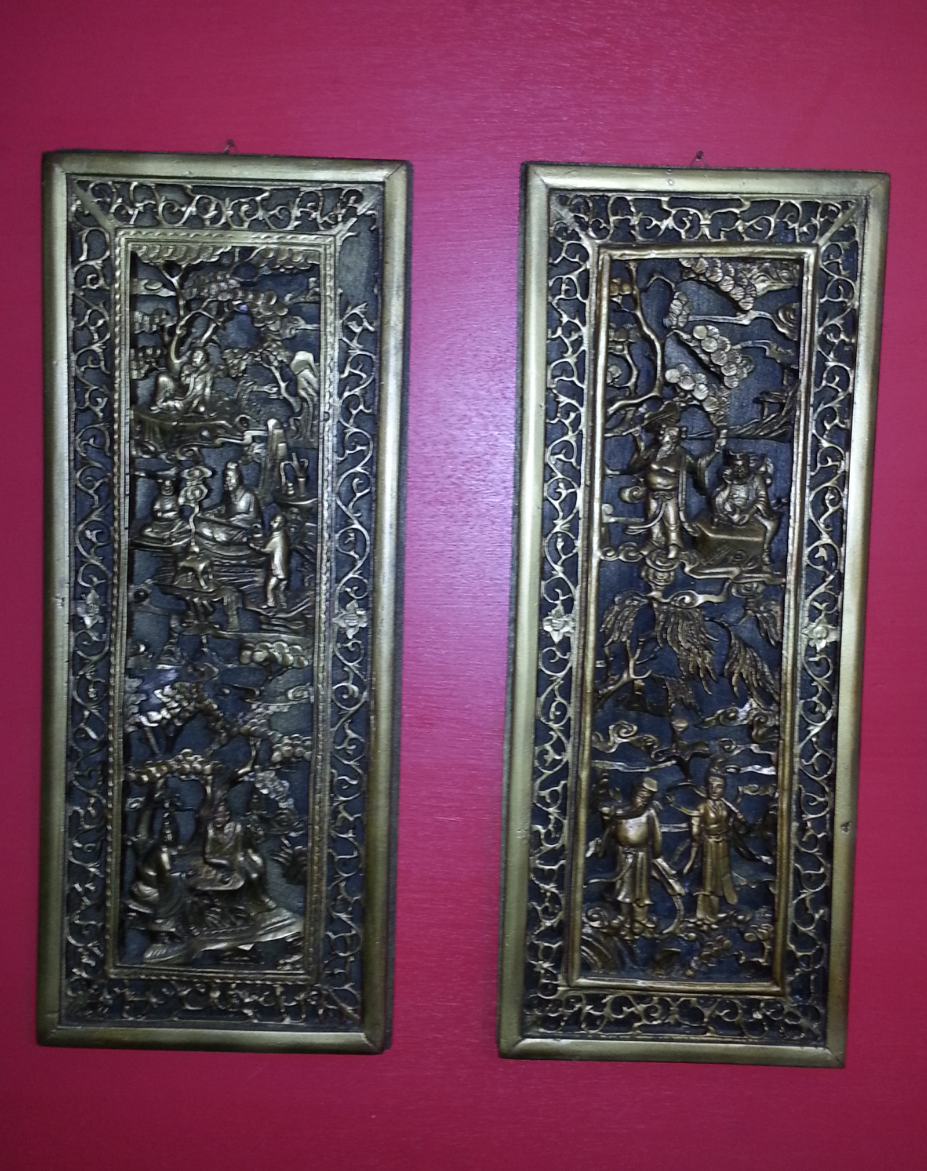 These old irons are no longer used today but it seems to be the most popular home decors by tourists who flock to the antique stores! 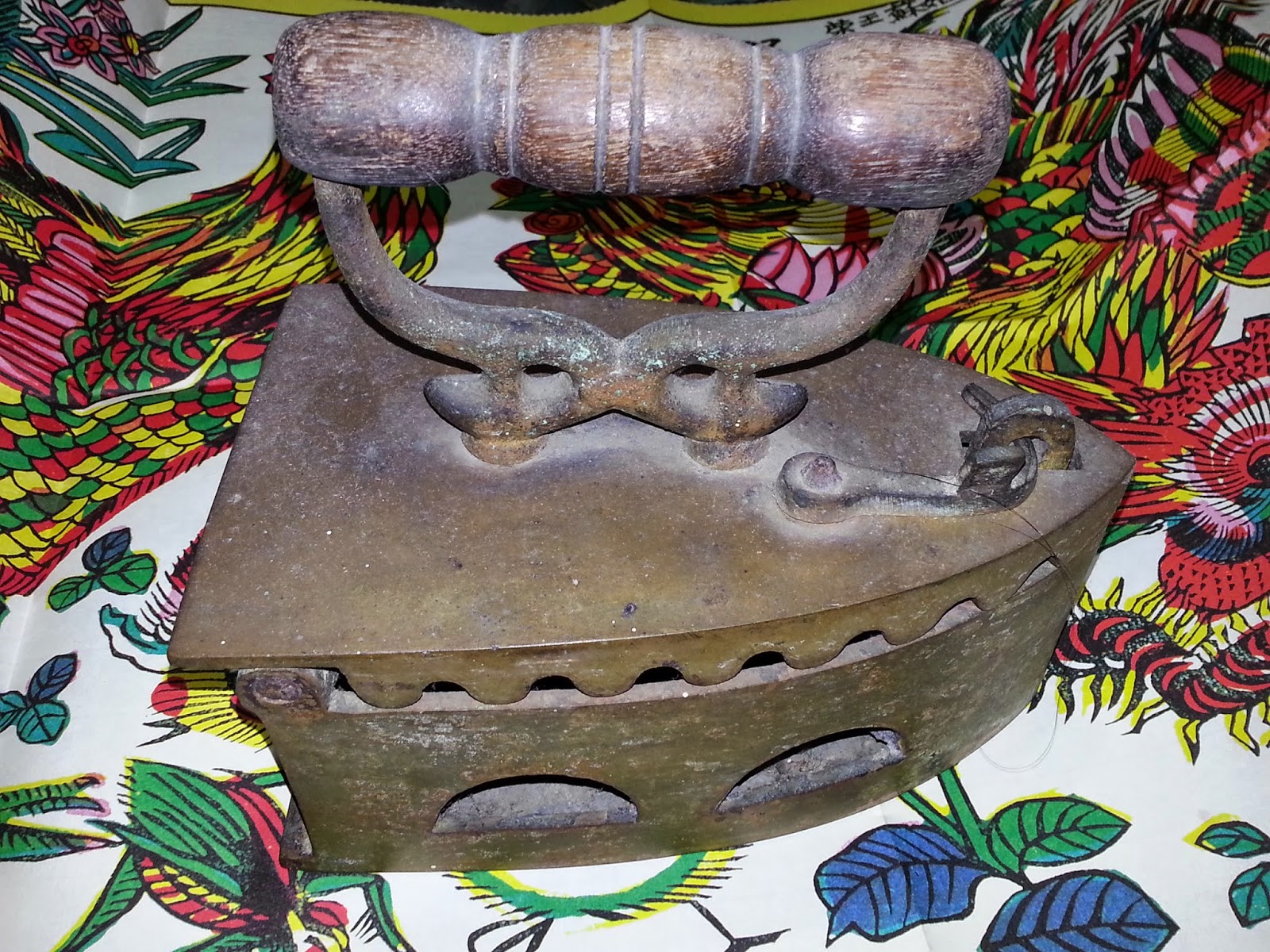 This old wrought irons are very heavy and good for pressing clothes! 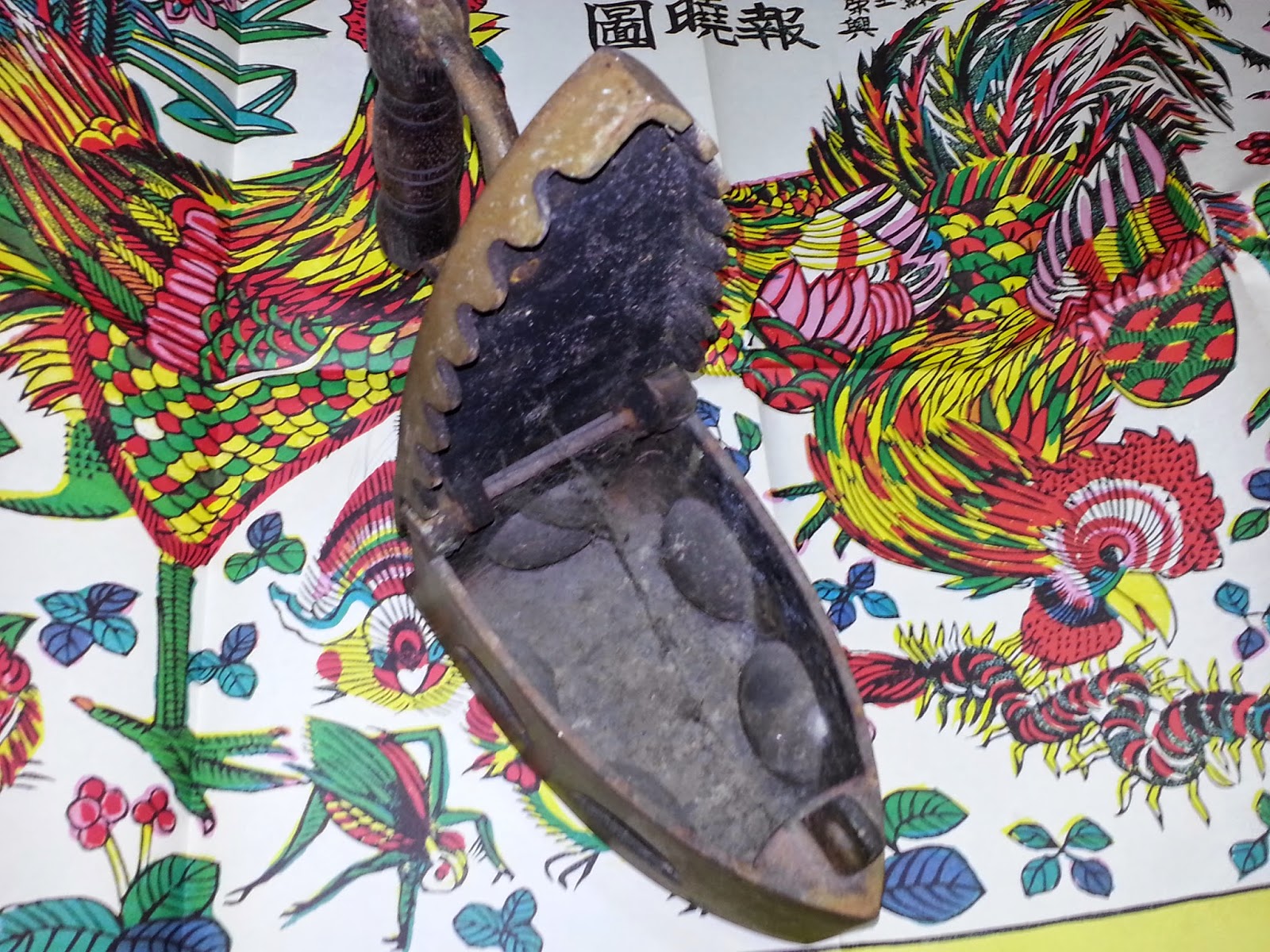 In the olden days, our grandmas placed hot burning charcoals inside here to heat up before pressing the clothes. 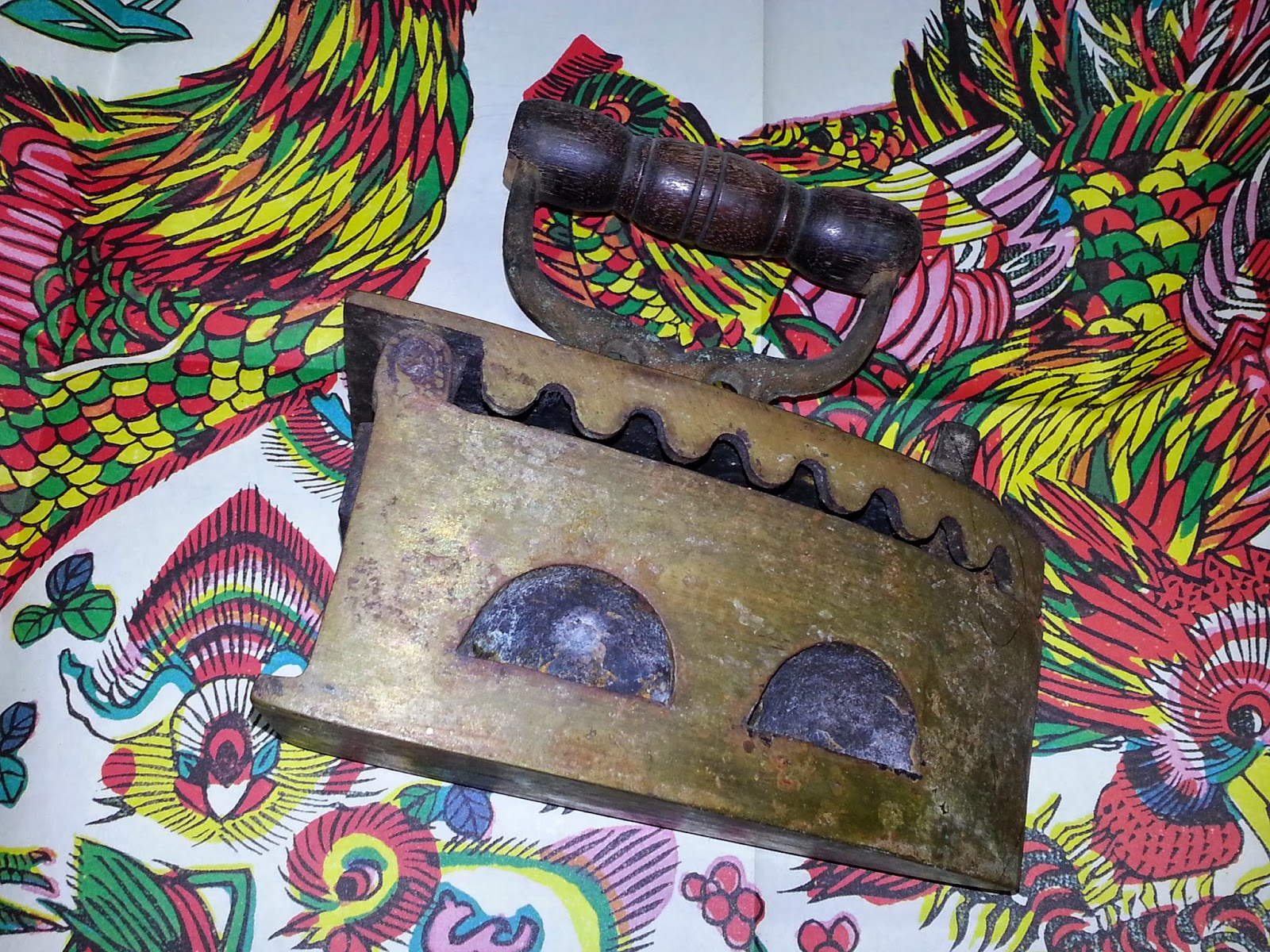 I often wondered which country invented these wrought irons? They come in many shapes and have been used in many parts of Asia for centuries.
Posted by I'm Antiques Lover at 18:47 9 comments:

Some 30 years ago, I found these assorted pieces of ceremonial plates belonging to my ancestors being stored away in boxes at my grandfather's house in Thailand. 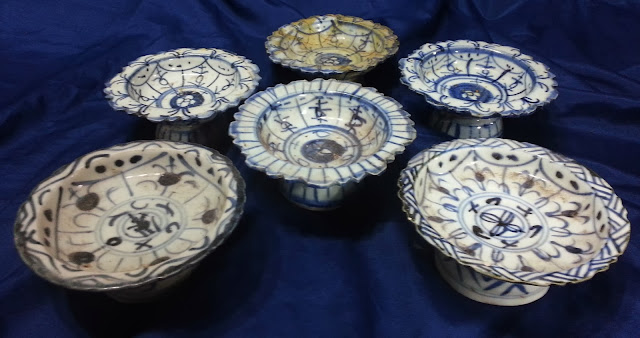 These plates with raised stands were often being used by my grandparents for ceremonial religious occasions. 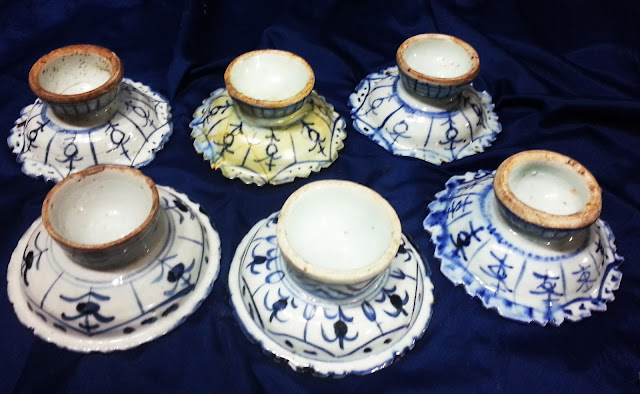 Usually small offerings like fruits, flowers and altar offerings are placed onto these plates during the wedding or religious ceremonies in Thailand. 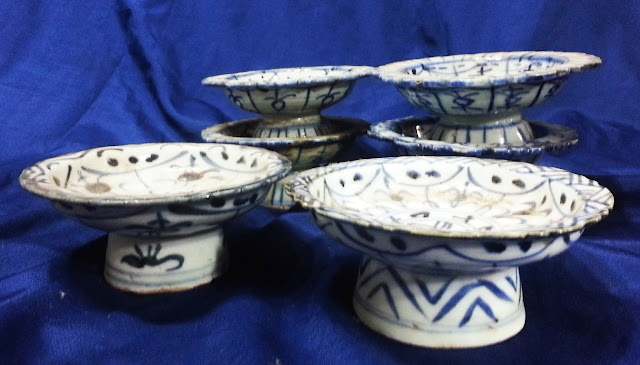 They are not dated anywhere on the plates but we all know that they were made in China over a hundred years ago. 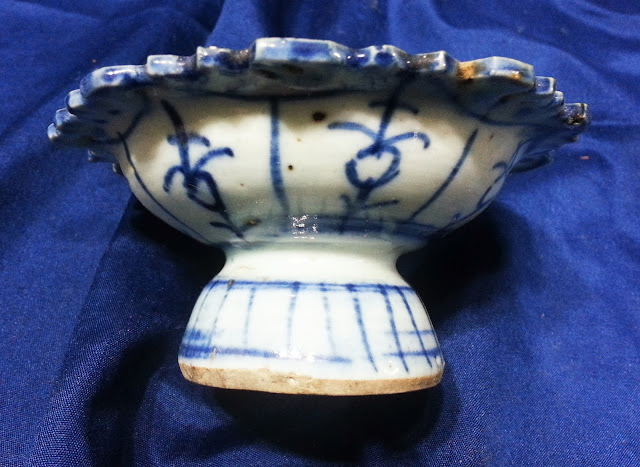 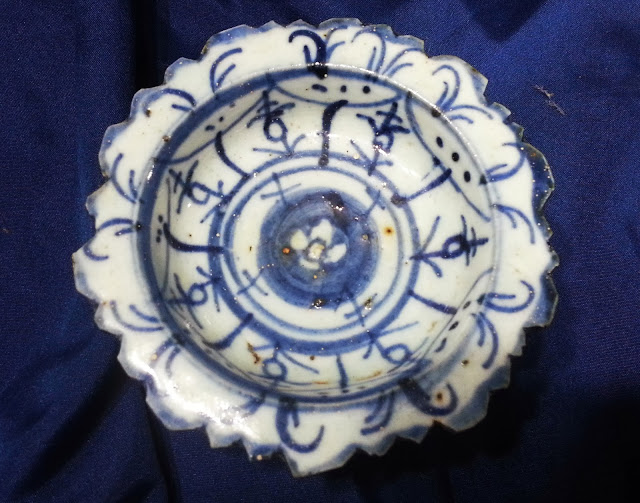 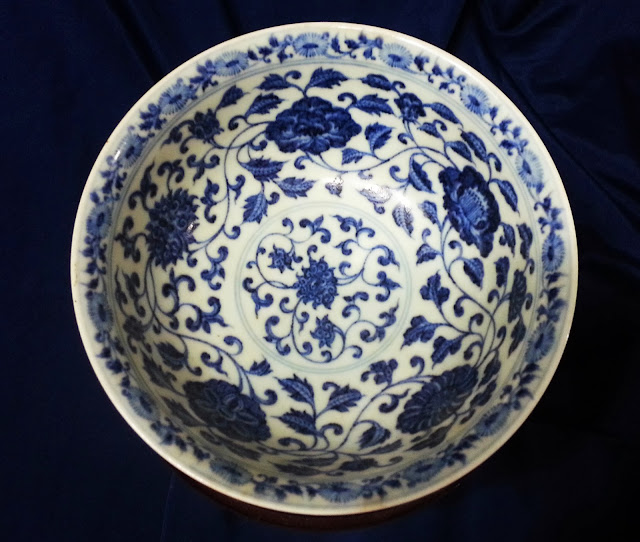 This is a lovely heavy bowl that lines with floral & leaf motifs in Blue & White. 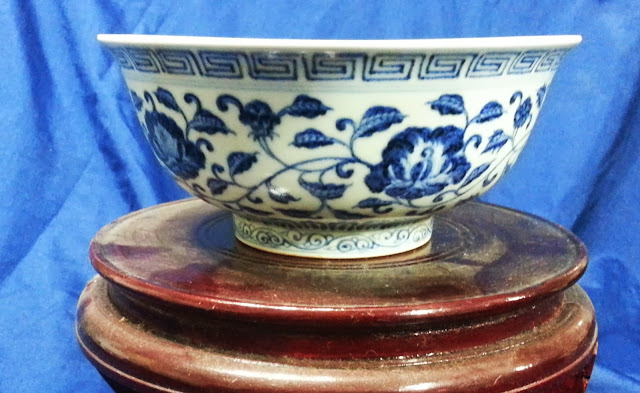 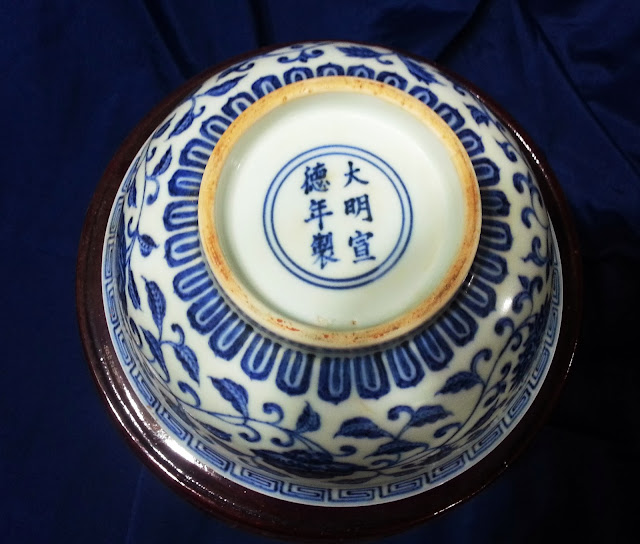 The bottom of the bowl says it was made during the reign of Ming Dynasty : Emperor Xuan Der 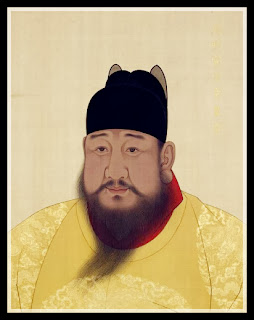 This big and heavy bowl has a beautiful Turqoise color that I had never seen anywhere. 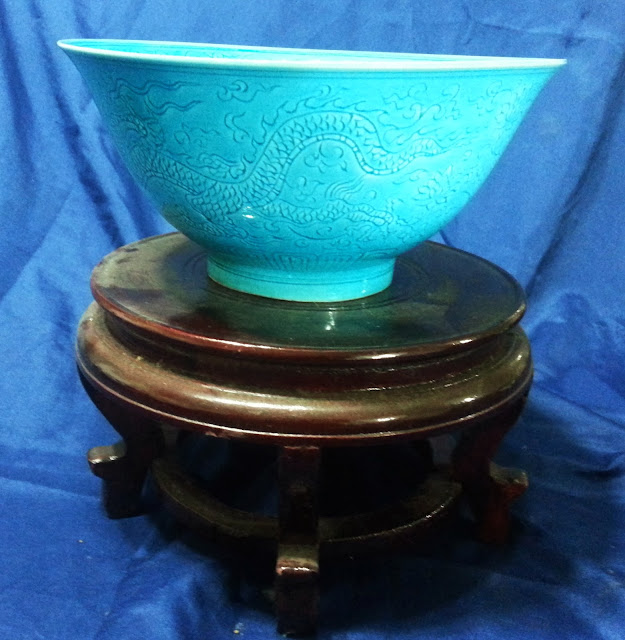 It has light embossed drawings of dragons flying around. 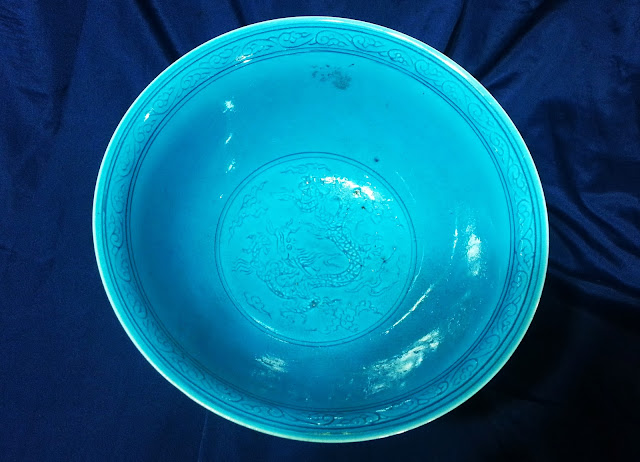 There is another dragon motif inside. 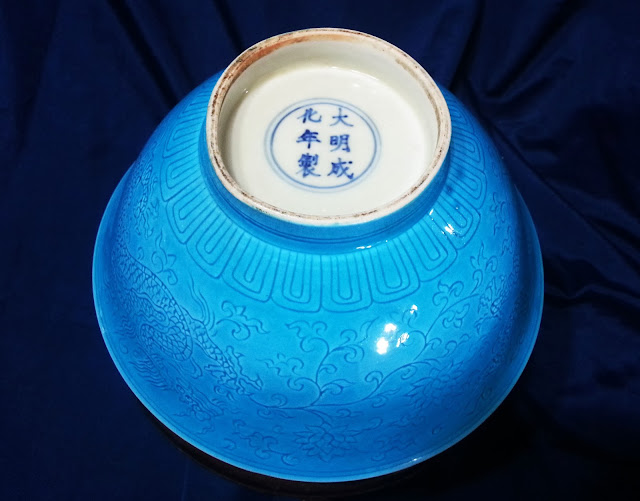 The above Chinese words dates back to the Ming Dynasty - Chenghua Period. 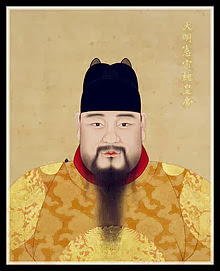 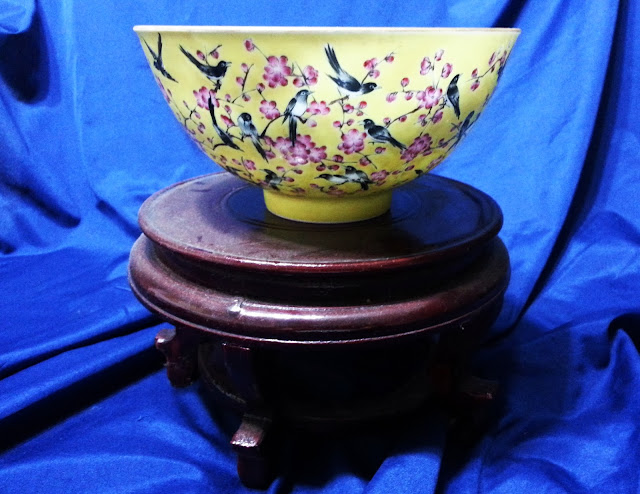 This porcelain Yellow Bowl was painted with many embossed birds perching on the blooming cherry tree. The Chinese beliefs on the geomancy that having many birds will bring abundance of travels. I am a firm believer in this. 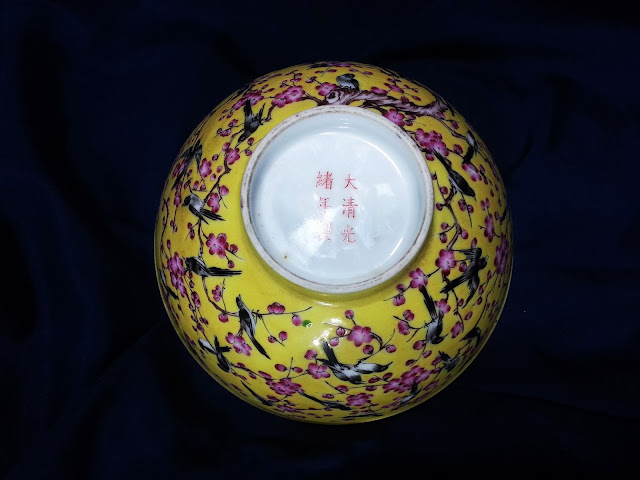 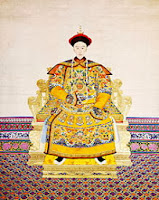 I was being presented with this set of  pretty flowery tea cups by an elderly inmate before she passed away. I only know that it was being made in China and this old designs were probably made during the era of Qing Dynasty. 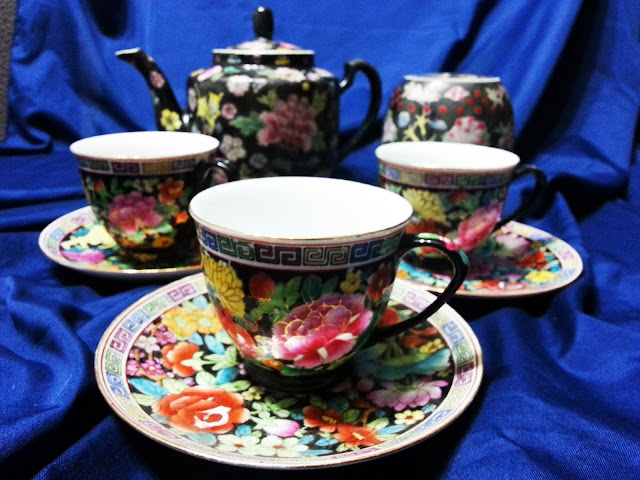 I bought the matching teapot and sugar jar separately from the Antique dealer in Melaka. The teapot itself was manufactured in China during the early 1970s. 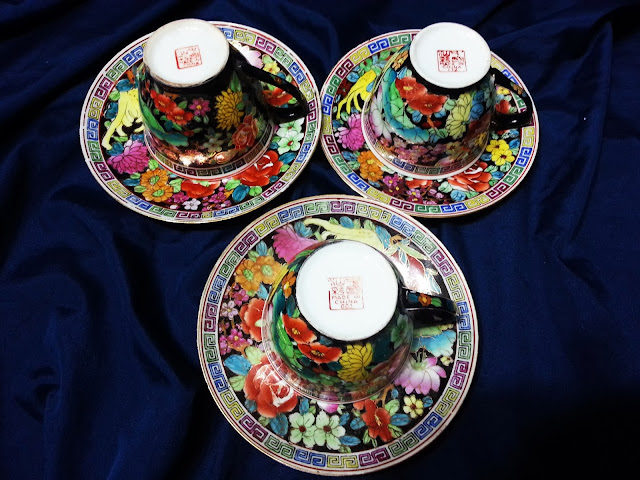 Such teacups were popularly used during festive occasions as the various Spring flower designs often commemorated the joyous and happy celebrations. 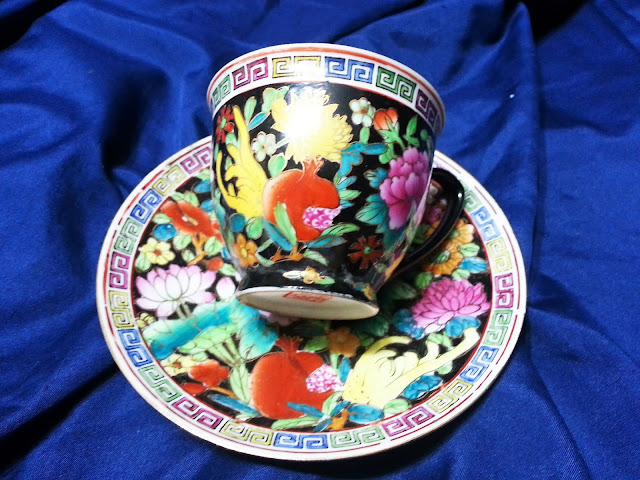 On closer look, you could see the popular and auspicious flowers which the Chinese folks liked to associate with for happy occasions - Lotus, Chrysanthemum, Camellia and even Passion fruits.
Posted by I'm Antiques Lover at 20:42 3 comments: